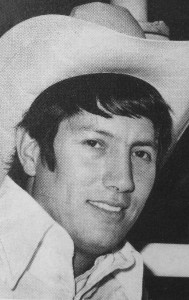 The world has lost a great world champion cowboy, bright legal mind, First Nations warrior, and devoted father, James Lionel Frederick Gladstone (“Many Guns”). After many years of battling a chronic disease, Jim passed away reluctantly, but peacefully at his home in Cardston, Alberta, on May 16th, 2015 surrounded by family members.

Jim had big moccasins to fill, as the eldest son of Fred Gladstone, and first grandson to his namesake, Senator James Gladstone. All three men were committed to rodeo, their Indian heritage and Blood Tribe, learning and education, and most importantly, their families. Senator Gladstone was a formidable farmer and rancher who brought modern farming practices to the Blood reservation. He was a trailblazer for Aboriginal rights, who served as president of the Indian Association of Alberta, and was the first Status Indian to be appointed to the Canadian Senate. Jim’s father, Fred Gladstone, continued the legacy with notable accomplishments, including: helping form the INFR and INFR Hall of Fame Inductee (2011); CRPA Gold Card Holder (1992); Canadian Calf Roping Champion in 1948 and 1950; Canadian Wild Cow Milking Champion in 1948 and 1956; received an award “In Recognition of Outstanding Service to the Native Community” (1974) by the Alberta Government; and, was a given “Pioneer of Rodeo” award by the Calgary Stampede (1985).

Jim was born in 1942 to Fred and Edith Gladstone in Cardston, Alberta, and had 3 siblings: June, (Jennifer) Caen, and Jeff (known as the 4 “J’s”). During his formative years, Jim learned from his father and grandfather’s example, and developed his love for athletics, honing in on a passion for rodeo. At a time when rodeo was still somewhat of a past-time, Jim spent countless hours practicing and drove thousands of rodeo miles perfecting his skills. He married in his early 20’s, and often brought his growing family on the road with him during his rise in rodeo rankings.

Jim’s hard work paid off in 1977 when he won the NFR World Calf Roping title. He became the first cowboy from north of the American border to take the world title in any of the timed events and the eighth Canadian to latch on to a global championship. He continued to be the only Canadian to win a world calf roping title. Jim won the average payoff at the NFR as well and pocketed $7100 with is go round and average placing plus another $5000 bonus. The 35-year-old father of five roped ten calves in 119.7 seconds setting a new NFR record and beating the previous mark by almost five and a half seconds and did it all under the handicap of a broken finger.

He wound up in 14th position with $18,300 and left the NFR on the shoulder of his countrymen waving the maple leaf flag. Jim earned his professional card in 1962 starting in calf roping and occasional wild cow milking. He began picking up cheques in steer wrestling by 1963. He has been credited with championships in both events from the all Indian circuit. Jim was among the top three in the nation professional rankings each year from 1962 through 1966, before capturing his first Canadian calf roping title in 1969. He went on to win two more Canadian championships in 1971 & 1973 and was runner up to the title in 1972, 75, 77, 76. Jim qualified for the Canadian Finals Rodeo seven times from the first one held in 1974 through 1980 and competed at four National Finals Rodeos in 1972, 73, 77 and 78. Jim also served on the CRCA board as calf roping director in 1979.

Jim won numerous All Star and MVP awards throughout his basketball career and competed in prestigious tournaments in Canada and the US. One of his favourite events was attending the annual Christmas All Star Basketball Tournament. Jim also appeared on national television show, Front Page Challenge and also the former CBC late night talk show.

With his desire to support his family and embark on other important life callings, Jim moved his family to Edmonton, Alberta, where he earned his Juris Doctorate in law from the University of Alberta in 1985, and passed his Bar exam in 1986. He subsequently practiced as a defense attorney for First Nations people throughout Southern Alberta until his retirement.

Although retired from law, Jim was elected to the Blood Tribe Council and served a four-year term completed in 2012. During this time, Jim took a strong (and unpopular) stance about hydraulic fracturing on the Blood Reservation and the need for regulations and factual information given to the Blood Tribe. He also worked on efforts to preserve the Blackfoot language on the reservation. True to his sense of statesmanship to the First Nations people, despite his fragile physical condition, he travelled to Edmonton, Alberta on April 2014, where he was inducted as a special witness for the Truth and Reconciliation Commission of Canada.

Jim cofounded the Blackfoot program, aitsi’poyiiksi, with Peter Weasel Moccasin in 2007 when they gathered elders at Jim’s home to solidify the concept and moved forward to formally organize the program in 2010.

Throughout his life and even more so in the last years of his life, Jim focused on spending time with his children and grandchildren, who brought him so much joy. In between all his career accomplishments, Jim was actively involved with his children’s lives and fostered a love for athletics and education. Friday night pizza, chips/cheese/pickles, and Ken’s popcorn were common favorites he liked to enjoy with his kids. He encouraged their independence, especially when it meant they could drive him around and “quickly” run a few errands for him!! Jim has always been a generous man and loved filling shopping carts of gifts for his family on Christmas Eve, taking family out for Chinese food and breakfast at IHOP, and buying the grandkids birthday gifts. He enjoyed his morning cup of coffee while reading the paper and doing the daily crossword puzzle. He was a devoted Direct TV and Dish Network customer and loved watching sports events of all kinds, the cooking channel, and movies, especially with his dog, Betsy, perched on his chest, while covered up in blankets, jackets, and a heater blowing in his face.

Jim was a proud Native man to the end, not wanting to burden others with his care and still insisting on walking for himself right to the end. His death has left a big hole in the hearts and lives of his family and friends, he will be missed greatly. May the Creator safely accompany him on the rest of his journey home, surrounded by loved ones. May he shoot some hoops before climbing onto his horse and riding off as the strong Native leader he is, knowing he successfully fulfilled the legacy of his Gladstone heritage.

His family wishes to thank those kind friends, family, and caregivers who were there for him in his declining years and declining health to help him and provide companionship when his children were not able to be near him. It is greatly appreciated and not forgotten.

The Funeral Service will be held at the CARDSTON AGRIDOME, Cardston, Alberta on Saturday, May 23 at 12:00 noon.