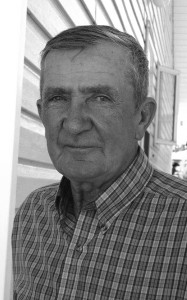 Jim was born in Brooks on September 23rd, 1939. He was the oldest of seven children born to Jessie and Sandy Dunsmore. Jim lived and was educated in Scandia, moving to Vauxhall in 1958. He loved spending time with family. He was known for the twinkle in his eye and the stories he shared. Jim enjoyed Vauxhall Jets Baseball and curling. Excavating was not only his work, but his passion. Jim has contributed to Southern Alberta Irrigation from E.I.D. to the Montana border, The Old Man River Dam to southern Saskatchewan. He attacked his work with precision and flawlessness. Jim also owned and operated the Southern Ranchmans Inn at Manyberries. He met Joanne Munsch in 2000 and they were married in 2003. Jim enjoyed learning the ranching life at Maple Creek with his new extended family, where he started to enjoy the retirement life in between working with Southern Dragline, meeting new friends with every dugout he made. Jim is survived by his immediate family: daughter, Shari (Wes) Manchester; and grandchildren, Kara and Drew. He leaves his amazing mother, Jessie; brothers, Jack (Marie) and Daryl (Karen); sisters, Sharon, Darlene (Glen), and Lynda; numerous nieces, nephews, family members and many friends. Jim was predeceased by an infant daughter; sister, Sandra Cook; father, Sandy Dunsmore; daughter, Kerrie Dunsmore; and numerous special family members. Jim is also survived by his second immediate family: wife, Joanne Munsch; stepsons, Dusty (Krysten) and grandson, Benjamin, Clint (Sheila) and granddaughter, Halley (Ana Luca), Shane (Lynanne) and family; stepdaughters, Cindy (Danny) Meier and family, Angela (Wayne) Reesor and family, and Dixie (Steve) Komistek and family. The Funeral Service will be held at SAAMIS MEMORIAL FUNERAL CHAPEL, #1 Dunmore Road SE, Medicine Hat, on Friday, June 5th, 2015 at 1:00 p.m. with Gary W. Goran officiating. In lieu of flowers, memorial gifts in Jim’s memory may be made to the SPCA, 55 Southwest Drive SW, Medicine Hat, Alberta, T1A 8E8. Condolences may be sent through www.saamis.com or to condolences@saamis.com subject heading Jim Dunsmore. Funeral arrangements are entrusted to SAAMIS MEMORIAL FUNERAL CHAPEL AND CREMATORIUM, “The Chapel in the Park”, Medicine Hat, Alberta. Should you wish any additional information, please telephone 1-800-317-2647.