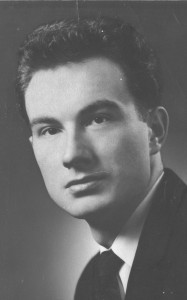 Stefan (Steve) Jan Brzezina of Coaldale, beloved husband of Beverely Brzezina, passed away peacefully on May 29, 2015 at the age of 77 years.

Steve was born on February 20, 1938 in Majdan Starowiejski, Poland and immigrated to Canada from Germany with his parents in 1950. He grew up and worked in Southern Alberta. Steve had a lengthy career with the province of Alberta as a tax assessor.

He loved his garden, fishing trips with family and friends, carpentry, and the companionship of the family pets.

Steve was predeceased by his parents Jan and Janina Brzezina and son Douglas Brezina.

A private graveside service will be held at Mountain View Cemetery, Lethbridge.

One Condolence for “BRZEZINA Stefan”