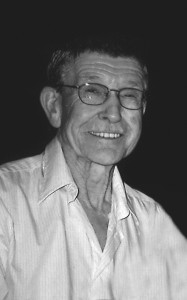 Mr. Theodore “Ted” James Bingham of Lethbridge, beloved husband of the late Audrey Mae Bingham, passed away suddenly but peacefully at the Chinook Regional Hospital on Friday, June 5, 2015 at the age of 81 years.

It is with heavy hearts that we announce the passing of our dear father and grandfather.

Ted was born in Hazlet, Saskatchewan on August 24, 1933. On April 11, 1956, he married Audrey (nee Shaw). In 1970 they moved their family from Yorkton, Saskatchewan to Lethbridge, Alberta where he established his own business (Ted Bingham Construction) the following year.

Ted’s greatest passion was vehicles. He took great pride by keeping them spotless, immaculate and well maintained. He loved watching hockey and his favorite football team (the Saskatchewan Roughriders).

Ted is survived by his son, Terry (Debra) Bingham and daughters, Vickie (Brad) Arksey and Holly (Gregg) Williams, as well as granddaughters, Aleigha Arskey and Savannah and Shaylin Williams. Grandchildren by affection are Katherine and Matthew Loo. He leaves behind two sisters, Millie Shaw and Pat (Stan) Hughs and one brother, Mervin (Irene) Bingham.

He was predeceased by his loving wife of 57 years (Audrey), parents, (Ralph and Emma Bingham) and siblings, (Ron Bingham, Clifton Bingham and Karolyn Geitz).