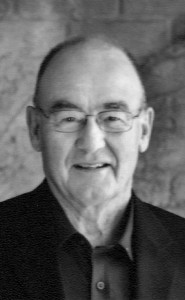 He is predeceased by parents Reginald and Evelyn Eyre.

Ron farmed and ranched in Jefferson, Mountain View, and Scandia. He later moved and worked for the City of Lethbridge, Electrical Department until his retirement. Years of camping and fishing with the family were the highlights of Ron’s life.

If desired, in lieu of flowers, donate to the Parkinson’s Society of Southern Alberta, 1254-3 Avenue South, Lethbridge, AB T1J 0J9.