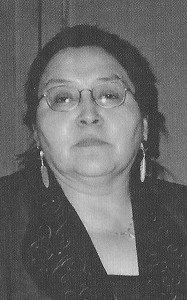 I’taksikkitstaki Joyce Annie (Many Fingers) Goodstriker, born at the Blood Indian Hospital on February 24, 1948, passed away peacefully in Blackfoot Territory. On June 7, 2015 I’taksikkitstaki traveled home to the Spirit World to be with her loving parents Piinakoyim Rufus Goodstriker and Namaaki Christine Many Fingers and her two beautiful younger sisters Christine Black Water and Lorraine Goodstriker. I’taksikkitstaki was a granddaughter to the late Ootahkooksikinakim Frank Goodstriker and Ootahkoiksowawakaasi Marion Weasel Fat (Paternal Lineage) and Omahkstookiohkitopii Morris Many Fingers and Annie Pace (Maternal Lineage). I’taksikkitstaki followed the traditional Kainai/Blackfoot way of life, she was initiated into the Mao’to’kiiksi (Buffalo Women’s Society). Her late father Rufus and Celina (Brewer) were members of the Iitskinayiiksi (Horn Society). Her brother Wilton and sister-in-law Evelyn were also members, as well as her late sisters Lorraine and Christine. Her daughter Piiyikkitstakiaakii Christine “Chrissy” and her nephew Eugene Weasel Head “Blue” were members of the Aihtsiisihtsi (Thunder Pipe Bundle) with Joyce’s parents Rufus and Celina. Chrissy is also a Kanattsoomitaiksi member with her partner, Joyce’s eldest grandson, Matsi’namahka Tyson Goodstriker.

Left to mourn is her daughter Piiyikkitstakiaakii Chrissy and four grandchildren; Matsi’namahka Tyson, Piinakoyim Jagger & Ikkaiyoota’si Jarrett and Amskapinatoyiikakatoosaki Karli, her brothers Ootahkooksikinakim Wilton (Evelyn), Rufus Jr. (Louise), Leon and her sisters Francis (Godfrey), Kathy, Rochelle (Corey), aunts, uncles, cousins, extended family and friends. Her nieces and nephews she claimed as her own children: Nadine, Jason, Chris, Joshua, Ross Jr., Jody, Renate’, Jessica, Shawna, and Carrie Dawn, will forever cherish their memories of “Auntie Girlie”. Joyce had numerous grandchildren and great grandchildren whom she considered as her own grandchildren. Joyce was predeceased by her parents, brother Charles, her nieces Cassandra and Angel and her nephew Shawn, her paternal and maternal grandparents, uncles, aunts and cousins.

Joyce’s love in life was beading, making moccasins, education and sports. As a Champion Barrel Racer she cherished her barrel racing granddaughters and never failed to challenge them by saying, “until you can pick up a barrel when its falling, while your rounding to the next barrel, I’ll still be better then you!” She bragged about her best friend/barrel horse-Hulaking; however, she continuously stated, “every time I was at a rodeo with Hulaking all those cowboys would bulldog & rope off of him, they would always win but they never gave me any money! I would have cleaned up in prize money if I charged them for my horse, especially after he came back all tired and sweaty! Wilton eventually confessed he trained Hulaking to win barrels but he also trained it to bulldog and rope! After her rodeo career, Joyce mastered the game of golf and competed in all-Indian tournaments in Alberta and the US where she collected numerous prizes. She loved with great passion, coaching & supporting athletes in all sports in the schools where she worked. She spent great efforts to get Kainai involved and competing at Indigenous Games throughout Canada and United States. She loved being in a cold rink, either curling or watching all her grandchildren master the art of Hockey, AND YES, Joyce was completely and ultimately a Calgary Flames Fan!

Joyce was a Teacher, Assistant Principal, Superintendent and Board Member for Kainai Board of Education from 1975-2010. Joyce was elected to serve Blood Tribe Chief and Council from 1984-1986, during that time she sat on the Blood Tribe Education Committee, she promoted local control of Education which occurred in 1988. Other Education experiences included; Educational Consultant for TsuuT’ina and Enow’kin Centre in BC, Bilingual Director for the Blackfeet in Browning MT, and Proposal Writer for various organizations.

The family would like to extend their sincerest appreciation to all the health professionals who took care of Joyce during her illness. The family would also like to thank everyone for prayers, condolences, donations and tributes as we send I’taksikkitstaki to the Spirit World.