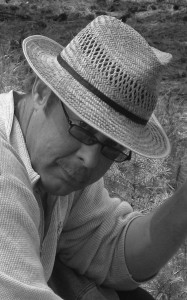 We are greatly saddened with the passing of Brian James Kaltenbruner, loving husband, son, father, grandfather, brother, uncle and friend to countless people. His life was taken too soon by a tragic accident Saturday, June 6, 2015. He was born January 17, 1964.

Brian was a singularly unique individual with an enormous heart and gentle soul. He wore his heart on his sleeve caring deeply for friends, family and customers.

Ethics were everything to Brian in life and business at Harold’s Auto Service. He’d toss and turn unable to sleep having not yet solved a vehicle issue, feeling he was letting someone down. His staff were ‘family’ in every sense and made him incredibly proud. Brian’s expertise and knowledge were the central glue of the company and he’s left enormous shoes that can never be filled.

Learning of the focus the Rotary Club of Lethbridge East placed on service to individuals and community, Brian joined in 2010. He not only talked the talk, but walked the walk helping behind the scenes in his personal and business life expecting nothing in return, donating resources to various causes and volunteering for many.

Brian was the embodiment of a good father expecting the best from his family, encouraging them to expect much from themselves and loving them deeply. His heart broke when their hearts were broken. He made sure his parents and grandparents knew they were adored and saw past sibling squabbles believing his brother and sister to be his heart and soul. Becoming a grandfather brought him unbridled delight. Brian loved and supported Beverly unconditionally expressing deep pride in whatever she did. Mutual respect and admiration was the lynchpin of their business and life success.

Brian loved life, love the rush riding and racing his motocross bike. He’d recently purchased his dream on and off-road BMW investing hours to perfect it for what would be his first and last trip away. His mancave is filled with trophies confirming expert motorcycle skills and his beloved “chick- magnet” 1950 Studebaker Starlite Coupe Deluxe. He was a 20 year member of the Over The Bars Club, treasured the times they met in his mancave to watch races, then have a hot tub with “the boys”.

Brian walked tentatively through life, often feeling uncertain of his support system yet surrounded by people who cared deeply for him. He put the needs of others ahead of his own often even his family believing it was the right thing to do. Brian never understood the impact he had on to others nor the measure of love, respect and esteem they held for him.

In lieu of flowers, memorial donations may be made to Rotary Club of Lethbridge East, 1715 Mayor Magrath Drive South, Lethbridge, Alberta, T1K 2R7.