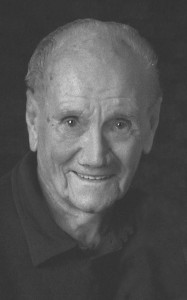 Born in England in 1918, Jack moved to Canada with his mother, May, and father, John at the age of one. They settled in Lethbridge, which was to be Jack’s home for the next 96 years. He was a founding and life member of the Electrical Contractors Assn. of Alberta, life member of the Kiwanis Club, life member of the Alberta Senior Golf Assn., leader in both the Cub and Scout movements and multiple other achievements too numerous to document.

In 1942 he married Ellen and their wonderful marriage endured for 72 years. They lived, loved and worked together, raising a family of three sons which expanded to include daughters-in law, grandsons, granddaughters, great grandsons and great granddaughters.

Although his professional and community accomplishments were considerable, his greatest pleasure was spending time with the family. Annual family gatherings with lots of food, music and companionship were his favorite events and his smile and laughter helped everyone enjoy themselves to the fullest.

Jack was predeceased by his parents, John and May King and his sister, Joan Williams.