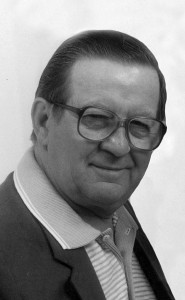 It is with profound sadness that we announce the sudden passing of our dear husband, father, grandfather, great-grandfather and Oda. MR. ALEXANDER KOGLER, beloved husband of Katherine Kogler, passed away on June 4, 2015 at the Chinook Regional Hospital.

Alex was born in Austria on October 8, 1931 to Alexander and Ida Kogler. He started his baking career at a very young age, beginning his apprenticeship at age 12.

He came to Canada in 1951 and married Katherine on August 18 of that year. Alex had many jobs including working in the sugar beets, a coalmine and at the Marquis Bakery. In 1961 Alex and Kathy opened Northside Bakery. He was very proud of his bakery and the excellent baking he produced. Many north side kids remember the best donuts and pastry that Alex made.

He was a generous man and was very active in the community. He sponsored many youth teams and was a proud sponsor of the Boys and Girls Club for many years. Alex also enjoyed 5 pin bowling and sponsored the Northside Bakery Bowling League.

In his spare time Alex loved golfing, hunting and fishing. Many happy family times were had at Alex and Kathy’s cabin at Duck Lake, Montana.

He was predeceased by his parents, sister Mitzi and brothers Hans, Sepp and Franz.

A private family Interment will be held at Mountain View Cemetery.