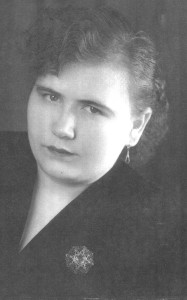 Mrs. Krimhild Rach formerly of Coaldale, beloved wife of the late Mr. Walter Rach passed away at the Chinook Regional Hospital on June 6, 2015 at the age of 78 years.

In the early 1950’s Walter & Krimhild emigrated from Germany settling in Coaldale. She worked at the Lilydale Chicken Factory for many years along with raising her family in the Coaldale area. After retiring Krimhild loved to garden and spent many hours socializing over a cup of coffee. She lived a simple life, and deeply cared for her family and friends.

Krimhild is survived by her sons Albert (Nancy) Rach and Frank (Julie) Rach; grandchildren Jaime, Dustin & Tanna, and great granddaughter Mikayla Kress, and her brother Werner Steffen of Germany and his family.

Besides her loving husband Walter, Krimhild was predeceased by her daughter Angelika Rach.