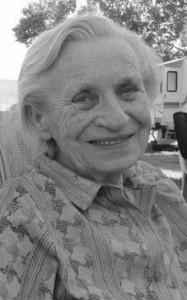 Julia Trent (Tokariuk) of Lethbridge, beloved wife of the late George Trent (Tokariuk), passed away peacefully at the Chinook Regional Hospital on Tuesday, June 9, 2015 at the age of 82 years.

Julia Gresl was born in Coalhurst, Alberta on November 8, 1932 to Anthony Gresl who immigrated from Orshava, Hungary and Mary Gresl (Kmit) who came to Canada from Olsavlea, Czechoslovakia. Julia was a light honey blond pretty little girl. As a teen she had a pet chicken in the household yard. She attended high school at the Lethbridge Collegiate Institute. In June of 1951 she married George Tokariuk of Sunnyside Area. They soon welcomed the arrival of a son Douglas and four years later Laura was born. During that time Julia trained at the Lethbridge Business School in Secretarial and book keeping. In 1967, the family name was legally changed to Trent. During her career she worked at Revelstoke Lumber as a legal stenographer for Huckvale, Wilde and Krushel in Lethbridge. She retired from work at the age of 55.

Julia lost her father and two uncles to the Coalhurst mining explosion of 1935. Shortly after Mary and Julia moved to Lethbridge. In 1970 Julia’s husband George died suddenly at the age of 47. Julia was an avid knitter and made many sweaters for her grandchildren. She enjoyed renovating and decorating her house. She helped many friend in preparing their income tax returns.

Besides her beloved husband George Trent (Tokariuk) was predeceased by her parents Anthony and Mary Gresl.