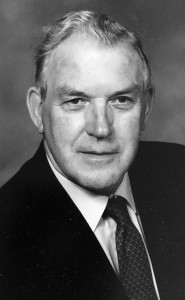 Alan Spearman was born in Haltwhistle, England on May 24, 1925, to Ann Berkley Spearman and Robert Edward Spearman. Alan met the love of his life Doreen in 1945 and they were married on June 21st, 1947. Mum and Dad enjoyed a wonderful 70 year relationship. Alan was a patient and loving father to Peter, Chris and Tim, always being a teacher and a role model. Family and friends were important to Alan. He always exhibited a positive collegial manner, warmly welcomed new friends and enjoyed the company of others. Alan liked to stay busy. His personal projects included building a house in Quebec and the many pieces of furniture in our family home. Alan enjoyed traveling, having circumnavigated the globe 3 times and crossed the Atlantic 29 times in his early career with the British merchant navy. 1n 1957, he began a new adventure by emigrating with his young family to Canada after accepting a position with Montreal Engineering Ltd. A graduate in mechanical engineering from Rutherford College and Stockport Technical College, England. Alan was involved in a wide variety of engineering projects for more than 35 years. These included marine, municipal and industrial projects such as pulp and paper mills, water treatment plants and electrical generating stations. In later years, Alan oversaw major projects, not only in Canada and the United States but also in diverse locations such as Lagos, Nigeria and Jakarta, Indonesia when his responsibilities expanded to include Africa, Australia, Asia and the Middle East as Vice-President, Thermal Division for Monenco Engineering. In retirement, Alan and Doreen lived in Saanich B.C., frequently going together on trips abroad or regularly visiting children, grand children and great-grandchildren. Alan is survived by Doreen, sons Peter and Chris, and grandchildren Jennifer (Gavin), Erika (Darcy), Matthew (Zoe), Heather (Jeremy), Kristen (Rod) and Andrew as well as 6 great-grandchildren. Funeral Services will take place as part of the regular Sunday Service at St. David-by-the-Sea Anglican church, on Sunday, June 14th at 10 a.m., with Reverend Canon Christopher Parsons officiating.