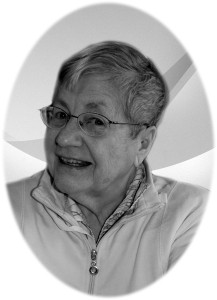 ETTA IRENE VINSON passed away peacefully at the Chinook Regional Hospital in Lethbridge on Monday June 8, 2015 at the age of 86.

Etta was born May 3, 1929 in Weyburn Saskatchewan, the only child of Ernest and Caroline (Wenz) McPherson. The McPherson family lived in Saskatoon before moving to Calgary in the early 1940’s. Ernest passed away unexpectedly in 1942, leaving his widow Carrie and young daughter Etta with the daunting task of completing the construction of the family’s home. This experience forged a strong and loving bond between Etta and her mother.

Etta attended school with cousins on her mother’s side in North West Calgary, and formed several lifelong friendships with school mates during this period. After completing her schooling, Etta worked for a few years as a comptometer operator with Alberta Pacific Grain. In 1953 she joined Socony-Vacuum Oil Company (Mobil), working on the company’s early computers.

Etta met her future husband Frank Vinson at work after he was recruited from Toronto to fill a vacant position in the mid 1950’s, and they were married on September 23, 1961. Shortly after their marriage, Frank surprised Etta with the pleasant news that he had made arrangements with Carrie for her to come and live with them, and Frank and Carrie shared many happy hours watching hockey while Etta pursued her own interests. The family enjoyed road trips, and in 1965, Frank and Etta and their mothers Bernice and Carrie made a particularly memorable trip to Nova Scotia where they participated in a MacPherson family reunion.

The family moved to B.C., where Frank and Etta owned and operated the Avonlea Motel near Saanich for several years in the 1970’s. They frequently returned to Alberta to visit friends and relatives, and eventually retired in Lethbridge where Etta was predeceased by Frank in 1994, and her mother in 1996.

Etta continued to travel, enjoying a cruise and occasional trips to Calgary to visit long term friends from her “knitting club”. In 2014 she travelled to Grande Prairie for a family reunion with her cousin Bob West’s family where she shared many wonderful memories from her childhood.

Etta will be remembered by dear old friends, her caring neighbours, and family members as an intelligent and creative woman. She was an exceptional knitter who designed her own sweater patterns and an accomplished seamstress who made everything from Barbie clothes to wedding dresses. She loved to oil paint and was a skilled artist. She was well informed, and enjoyed reading and watching the news.

In accordance with her wishes, Etta will be cremated and her remains scattered on her father’s plot in Queen’s Park Cemetery in Calgary.