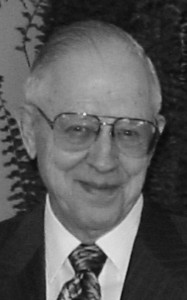 GARTH ANDREW QUINTON , passed away peacefully in Cardston on June 11, 2015 in his 97th year. He was predeceased by his parents Frederick James Quinton and Sarah Loila Woolf Quinton and an infant son, Kenneth Wayne (1951), two brothers and two sisters.

He was a faithful member of The Church of Jesus Christ of Latter-day Saints and served faithfully in many callings. He especially enjoyed his years of service in the Alberta Temple.

Garth worked for Laidlaws on Main Street Cardston for Fifty years and was well known in the community. At his retirement Laidlaws made this observation, “No one could have been more loyal or honest”.

He also worked many years with his father at the family ranch and enjoyed working cattle.

His skill with a popcorn popper was unsurpassed and the family enjoyed many Sunday evenings with a bowl.

The family would like to thank the staff and nurses at the Cardston Hospital who took such good care of Dad for his last few weeks. He will be greatly missed.

The Funeral Service will be held at The Church of Jesus Christ of Latter-day Saints, CARDSTON STAKE CENTER (East Hill) on Monday, June 15, 2015 at 11:00 a.m. Interment to follow in the Cardston Cemetery.

Send your condolences to: legacyfuneralhome.ca