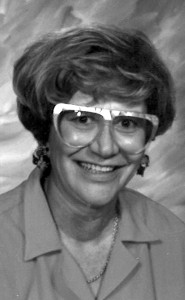 The family, with much sadness, announce that SHIRLEY MARGARET REVESZ passed away on Thursday, June 18, 2015 at the age of 73 years.

Shirley was born in Cardston, Alberta on April 20, 1942 to her parents Isabel and Joe Revesz. Shirley obtained her education in Southern Alberta, graduating from Stirling. In school there, she was on the basketball team called the Wrentham Wizzettes. For the 1959-60 season, the team were the Southern Alberta Champions and also took second place in the Provincials. The team was honoured by the Alberta Schools Athletic Association in 2009 at a 50 year reunion. Shirley then went on to receive her teaching certificate from the University of Edmonton. Her first job was at Grouard, Alberta on the Lesser Slave Lake. She then came to Lethbridge and taught grade one at Lakeview School for almost 30 years until her retirement where she was known as “Miss Shirley”. Her hobbies included pottery and golfing, being a member of the Lethbridge Country Club.

Shirley is survived by her loving brother and sister-in-law Richard and Doreen Revesz, her nephew Richard M. Revesz, her nephew and niece Jeremy and Shannon Revesz and their children Josephine and Nolan, all of whom she loved very much. She is also survived by very good friends Andy and Bonny Kovacs as well as aunts, uncles and cousins.