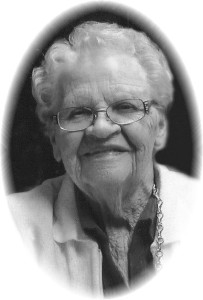 June Audrey Rhodes of Champion, beloved wife of Walter passed away peacefully at the Vulcan Community Health Centre on June 18, 2015 at the age of 89 years.

Tributes in June’s memory can be made to the Vulcan Community Health Centre, Box 299, Vulcan, AB T0L 2B0.