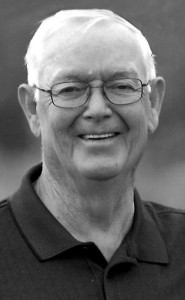 With great sadness we announce the passing of ROBERT “BOB” HEATON, beloved husband of Marilynn (nee Scherer). Bob passed away peacefully, surrounded by his family, in the St. Michael’s Health Centre – Palliative Care Unit, on Monday, June 29, 2015, at the age of 76 years. Bob was a loving father to Karen (Bill Ewing), Melanie (Pat Belliveau), and Neil (Trish Jackson), grandfather to Amy Ewing (Fabian Richards) and Arla Ewing, great-grandfather to Jordan Ewing-Richards, and special uncle to all his nieces and nephews, especially Amber and Joel Mueller.

Bob was born on February 27, 1939 in Lethbridge, Alberta. He is survived by his brother Donald (Norleen) of Waterloo, ON and predeceased by his parents, Harold and Kay Heaton.

Bob and Marilynn were married on September 15, 1962. To Bob’s delight, Karen, Melanie and Neil arrived shortly thereafter. Spending time with his family was the most important part of his life and he enjoyed their holidays, parties and vacations together.

Bob spent 30 years as a primary products inspector for the federal government, followed by five years in provincial government meat inspection. His passion was being of service to others where he volunteered at Chinook Regional Hospital, moving through various positions over 35 years. He was also active in various ministries in his church and a member of the Knights of Columbus.

He enjoyed woodworking, fishing and camping and travelling with friends and family, especially the cruises and bus trips. Bob courageously fought a two-year battle with multiple myeloma (a type of cancer), which unfortunately brought his travels to an end. The family would like to thank all the medical staff that provided such excellent care with special heartfelt appreciation for Dr. Benke and the staff at the Jack Ady Cancer Centre and Dr. Smuts and the staff at St. Michael’s Health Centre Palliative Care. A Prayer Service will be held at CORNERSTONE FUNERAL HOME – 2800 Mayor Magrath Drive South, Lethbridge, Alberta, on Friday, July 10th, 2015 at 7:00 P.M. with Mr. Gary Hudak officiating.

A Funeral Mass will be celebrated at OUR LADY OF THE ASSUMPTION CATHOLIC CHURCH – 2405 – 12 Avenue South, Lethbridge, Alberta on Saturday, July 11th, 2015 at 11:00 A.M. with Father Nathan Siray celebrating.

In lieu of flowers, the family requests that donations be made in memory of Bob to the All Saints Parish Building Fund – 2405-12 Ave. S., Lethbridge T1K 0P4.