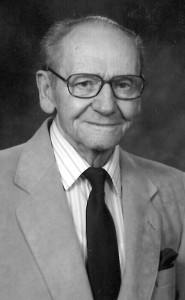 Alexander (Alex) W. Kalau passed away on June 30, 2015 at the age of 86 years. Alex was born on September 04, 1928 in Lithuania, he immigrated to Canada in 1951 where he lived in Milk River and Stirling. In 1965 he married Irma Ryll and they lived in Lethbridge where they raised their two girls. Alex was a carpenter working in the Commercial building trade until he was forced to retire due to poor health. He is survived by his loving wife Irma; daughters, Karen and Rita; son-in-law Greg; brothers Simon (Elsie) and Albin (Shirley); as well as cousins, nieces, nephews and their families. Family and friends are invited to pay their respects between 7:00pm and 8:00pm, on Monday, July 6, 2015 at MARTIN BROTHERS RIVERVIEW CHAPEL, at 610-4St. South, Lethbridge. A Memorial Service will be held at 11:00 am, on Tuesday, July 7, 2015 at IMMANUEL LUTHERAN CHURCH, at 20 Rocky Mountain Blvd. W. Lethbridge. A private family Graveside was held at Mountain View Cemetery. In lieu of flowers, those who wish may make memorial donations to the Arthritis Society, 200-1301 8th St. SW, Calgary, AB, T2R 1B7, or a charity of one’s choice.