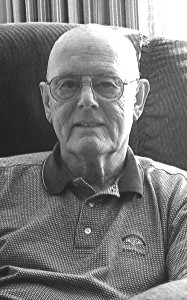 Jack Kendal Nixon passed away in Lethbridge, Alberta on June 15, 2015 at the age of 93. Jack was born June 5, 1922 in Russell, Manitoba and moved to Winnipeg with his parents as a young boy. During World War II, he was in the Air Force in England, where he supervised a crew loading bombers. After the War, he returned to Winnipeg where he married his high school sweetheart, Betty Cruse.

Jack went to University in Manitoba on the G.I. Bill and earned his degree in Interior Design. He worked as a sales representative for Kawneer Canada based in Winnipeg. Jack and Betty later moved to Vancouver in 1972 after he was promoted to Western District Sales Manager; a position he held until retirement. In 1996, they moved to Lethbridge to be closer to family. Jack always enjoyed helping Betty with her gardens, was an avid golfer and a talented wood worker.

Jack will be cremated by Martin Brothers Funeral Chapel in Lethbridge and an interment will take place at Chapel Lawn in Winnipeg in late July, where he will be laid to rest beside his true love, Betty.