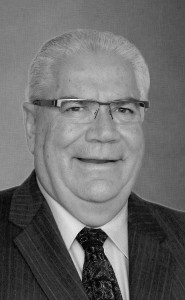 With incredible sorrow, the family of RICHARD JOSEPH REVESZ announce his sudden passing on Thursday, July 2nd, 2015 at the age of 68 years.

Richard was born in Cardston, AB on February 17th, 1947 to his parents Joe and Isabel Revesz. He grew up in Wrentham, Alberta and then moved to Lethbridge.

Richard’s hard-working and driven nature, served him well as he simultaneously held positions at Sears, Canada Post and the drive-in/movie theatres. His friendly personality and boisterous laugh quickly led him to be promoted from stockboy at Sears to sales associate where he remained for 34 years. During his tenure at Sears, he worked in the hardware, furniture and appliances departments. Outside of work, his favorite past times were fishing, building and selling homes, and tending his vegetable garden, especially his tomatoes. Above all else, Richard loved spending time with his family.

Richard will be forever remembered by his loving wife of nearly 45 years, Doreen, son Richard M. Revesz, son and daughter-in-law, Jeremy and Shannon Revesz and their children Josephine and Nolan; all of whom he loved dearly. He also leaves to mourn his special niece, Amanda Grouette, along with many other cherished family and friends.

Richard will also be dearly missed by his very good friends Andy and Bonnie Kovacs, Mike and Janey Stanko, and their families and all those who were blessed to have known him.

Richard has joined his recently departed sister, Shirley, and has been reunited with his parents.

In loving memory of Richard, memorial donations may be made to the Alberta Heart and Stroke Foundation of Alberta, NWT & NU 100-119 14 Street NW Calgary, Alberta, T2N 1Z6.

One Condolence for “REVESZ Richard”