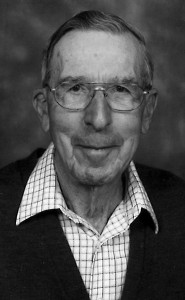 LEONARD A. WENSMAN, beloved husband of Margaret Wensman of Milk River, AB., passed away peacefully on Monday, June 29, 2015 at the age of 86 years.

Leonard was born in Lethbridge, AB to August and Anna Wensman on May 30, 1929. He began his farming career at an early age, when his father passed away. On September 29, 1962, Leonard married Margaret Sieben in Calgary, AB. They farmed east of Milk River and raised their five children. They retired to Milk River in November 1989. Over the years, he was involved in many local organizations. Leonard loved ski-dooing, fishing, hunting and camping. He enjoyed curling, golfing, shooting pool, making sausage, gardening and playing cards as well. He always had time to spend with family and took great pleasure in watching his grandchildren grow. Leonard was always willing to lend a hand when needed and he will be greatly missed.

A Funeral Mass will be celebrated at ST. PETER’S CATHOLIC CHURCH on Tuesday, July 7, 2015 at 11:00 A.M. with Reverend Dominic H. Nguyen, Celebrant.

A private family Interment will follow the reception at the Allerston Cemetery.

In lieu of flowers, donations may be made in Leonard’s honour to the Heart and Stroke Foundation, P.O. Box 2211, Lethbridge, AB, T1J 4K7 or a charity of your choice.