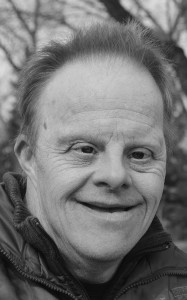 It is with heavy hearts we announce that our beloved Douglas Earl Anderson passed away peacefully in his sleep on July 3, 2015 at Chinook Regional hospital after a very brief illness. Doug was born on August 6, 1961 in Lethbridge. On November 12, 1991, Doug became a founding Core Member of L’Arche Lethbridge where he lived at Chinook House until his passing. Doug was well known in Lethbridge as a natural public speaker and was a great ambassador for L’Arche, which afforded him many opportunities to speak publically about things from his heart. He was also a member of the River of Life Church and the Knights of Columbus # 10547. Doug was very patriotic and loved to sing O’Canada. If you look closely while he sang it, you would for sure see a tear in his eye. Doug always enjoyed a good hockey game. He was a big fan of the Lethbridge Hurricanes and he enjoyed to watch Don Cherry. Doug loved God and church and his favorite place was anywhere the “big” bus was going. He enjoyed swimming, carpet bowling, going for walks, prayer, music, and playing the guitar.

Many people from all over the world (from as far away as Kenya and Morocco) were blessed by his easygoing personality and his happy disposition. He will be sadly missed by Bill Alles (who was an ever caring presence in his life) his L’Arche family, as well as his many friends at Quest and throughout the city.

A Visitation will be held one hour prior to the service, from 9:00am to 10:00am. Interment to follow in Mountain View Cemetery.