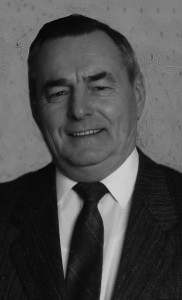 FRANCIS G. J. WRIGHT, beloved husband of Elaine Wright of Lethbridge, passed away in his sleep on Wednesday, July 15, 2015 at the age of 87 years.

Francis is survived by his children, Donna (Ron) Siemens and their children Tim (Kelly) and Shana (Rick); Roberta (Jim) Corey and their children Jennifer, Kevin (Vanessa) and Brad (Joanna); Lyle and his children Breeze and Brenton; Don and his son DJ, along with 12 great-grandchildren, 3 sisters, 2 brothers, 2 sisters-in law and numerous nieces and nephews.

Francis was predeceased by his parents John and Agnes Wright, 2 sisters and 2 brothers. Dad was born in Lethbridge on December 24 1927, the third of ten children to John and Agnes Wright. He started his lengthy sports career at a very early age. Dad was a multi-talented athlete who shone in many sports, most notably boxing, hockey and fastball. He was a recipient of the Lethbridge Sports Hall of Fame Award in 1991 (Team) and 1993 (Athlete).

Dad started driving school bus in 1946 at the age of 18 and he drove the bus in the Sunnyside area for 43 years. Dad lived and farmed in the Eight Mile Lake district for 61 years. During this time he served two terms as a County of Lethbridge councilor. His love of antique cars led to the restoring of many vehicles over the years with Elaine in the shop as his helper. This led to being a longtime member of the Lethbridge Antique Car Club.

Thank you to the staff at St Therese for their wonderful care and occasionally filling in as his dance partner.

A private family service will be held at a later date