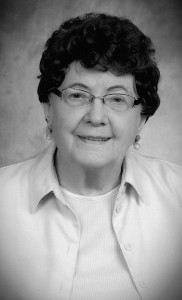 Leila Finley was born November 5,1915 in Raymond, AB, the sixth of seven children, to Charles and Eldora Lamb.

After completing high school in Raymond, Mom went to Salt Lake City to train as a stenographer, which eventually led to a steno position at the new Sugar Factory in Picture Butte, where she met the love of her life, J. Ray Finley. They married in 1940 in Lethbridge and settled in Picture Butte. The family grew by one in 1944 when Carol Diane came along, followed two years later by little brother Brian Ray.

Mom stayed and worked at home until both kids were in school and then returned to the Sugar Factory for a few years. She then joined the Bank of Nova Scotia and was there for over 20 years.

Following Ray’s retirement from the Sugar Factory in 1980 (coincidentally the same year the factory closed), they moved into Lethbridge.

Mom and Dad enjoyed their retirement years in Lethbridge, making new friends and visiting kids and grandkids. After Dad’s passing in 1994, Mom moved “uptown” to a seniors’ high-rise, where she cooked full and well-balanced meals for herself. The family used to joke that “Mom was into health food before health food was cool”. Mom moved into Columbia House Assisted Living in 2010 after her pelvic fracture, and got around very well with her walker. She made many new friends there and socialized with them right up until her broken arm and hospitalization.

Thank-you to Dr. Gillis and the wonderful, dedicated nursing staff on 3C at Chinook Regional.

Mom will always be remembered with love for her kind, gentle way, her outstanding baking and love of family.

In lieu of flowers, memorial donations may be made to the charity of one’s choice.