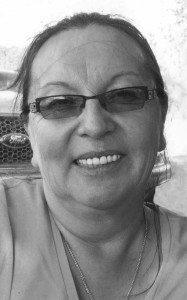 It is with heavy hearts that our family announces the passing of Charlene Ann Fox (nee Frank), wife, daughter, mother, grandmother, and sister of the Blood Nation.

Charlene was a dedicated wife, mother and grandmother and was a devoted home maker for her family. Her passions included advocacy for Blood Tribe women, youth and children through education. She had many culinary skills and was a successful cook and caterer for agricultural workers and other groups on the Reserve. She was known for her famous potato salads, pies and Christmas dinners. She enjoyed her trips with Ed to Las Vegas and was planning a trip with her sister Lois in August. They won a Karaoke competition one year and joked that they wanted to repeat their success in Vegas. She enjoyed her occasional trips to Bully’s, where she often met friends from the Blood Reserve.

She attended the Spring Coulee and Magrath Schools in her formative years and greatly valued education. She encouraged her children and her nieces and nephews to pursue their education and was there for many graduations. She was especially proud of her children’s accomplishments and instilled a strong work ethic.

Charlene always supported her husband, brothers and her sons in their farming, ranching and many other endeavours. She was a spiritual person who raised her children in a loving manner and was a guiding presence for her family both on the Blood Reserve and on the Siksika Nation where she had maternal roots.

The family would like to thank Dr. Susan Christensen as well as the staff of the Cardston Hospital for their excellent care of Charlene during her illness.

Charlene belonged to the Fish Eater Clan and married into her husband’s Many Children Clan. Charlene came from a huge extended family including the following families: Good Striker, Fox, Running Rabbit, Many Fingers, Doore, Healy, Duck Chief, Sweetgrass and many others on the Blood and Siksika Nation. She was a life time friend and neighbor of the Lucy and Alfred Blood family who shared many events at the St. Mary’s Dam community.