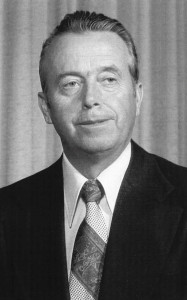 Russell Melville Quantz, passed away and went to be with his Lord and Savior on July 15th 2015 at the age of 96.

Russell Quantz was born on Saturday, November 2nd, 1918 on the family homestead located near Tincherbray, Alberta. He was the second oldest in a family of eight boys and two girls.

Russell was a proud veteran of the Royal Canadian Air Force. He enlisted in 1942 and was subsequently posted to Leeming RAF base in England. He served his country attached to the 427 Lion Squadron for the duration of the war. While in England he met and married the love of his life, Elsie Tranter. Russell returned to Canada, finished his High School education and in 1949 graduated with a Bachelor of Theology from Canadian Nazarene College in Red Deer. Reverend Quantz pastored churches in Eckville, Rocky Mountain House, Lougheed, Sheffield England, Caroline, Westlock (Dapp and Jarvie), Claresholm and Picture Butte. In retirement Russell and Elsie returned to Caresholm where he has lived until his passing.

“For I am convinced that neither death nor life, neither angels nor demons, neither the present nor the future, nor any powers, neither height nor depth, nor anything else in all creation, will be able to separate us from the love of God that is in Christ Jesus our Lord”. – Romans 8:38-39