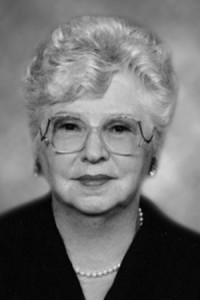 Kathleen Hunter passed away in peace in Edmonton three days short of her 101st birthday.

Kathleen was born and raised in Winnipeg, Manitoba, the only Canadian-born member of her Irish family. She married William Craig Montgomerie in 1941, and gave birth to her first son, Craig in 1945. In 1949, the family moved to Calgary, where they became established members of the community and made long lasting friendships. Kathleen was very active in both the insurance community, helping organize the 1958 Blue Goose convention at the Banff Springs Hotel, and the wider community as a member of the organizing committee for the opening of the Southern Alberta Jubilee Auditorium. With their second son, Ian, the family moved again in 1959, this time to Lethbridge, where she spent the next four decades.

After working at both St. Andrew’s Presbyterian Church and the Lethbridge Junior College, Kathleen became the first employee of the newly established University of Lethbridge in 1966, and went on to serve as Secretary to the President for the first three University presidents. In this time, she witnessed the founding of the University and its growth from temporary buildings, through construction of its unique new Arthur Ericson-designed building, to the respected institution it is today. Kathleen retired in 1975 and, along with her husband, Bob, enjoyed travelling, entertaining family and friends, and playing bridge. She was also very creative, leaving those behind with treasured knitting and miniatures she and Bob made. She moved to Edmonton in 2001 to be close to her family.

The family extends heartfelt thanks to the staff of the CapitalCare Grandview in Edmonton for their kind and professional care during her eight years of residence.