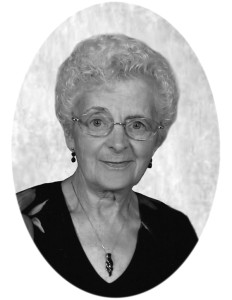 JOAN MARY MCNAUGHTON, beloved wife of the late Robert McNaughton of Lethbridge, passed away at the Chinook Regional Hospital, on Thursday, August 6, 2015 at the age of 82 years.

Besides her husband Robert Malcolm McNaughton, Joan was predeceased by her daughter Cathy Bilyk and 2 brothers Vernard and Murray Wright.

Joan and her identical twin Jean were the eldest of ten children born to Albert and Bessie Wright of Dartmouth, Nova Scotia. Joan was a keen student but her and Jean’s education was cut short in grade 10 as they had to help support the family when their father became ill with tuberculosis. While working in the Navel offices in Halifax she met Bob McNaughton. They were married Sept 26th, 1956 and were blessed with four daughters. Through numerous moves across the country Joan made many dear friends, leaving a positive impact on everyone. Nothing was more important to her than her Christian faith and her family. She will be dearly missed.

A Funeral Service will be held at the EVANGELICAL FREE CHURCH Highway 4 just east of 43 street intersection, Lethbridge, Alberta on Tuesday, August 11, 2015 at 1:00 P.M with Pastor Scott Currie officiating.