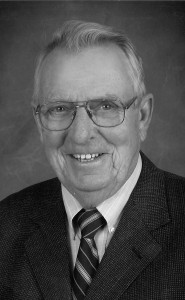 Our beloved LAWRENCE “LARRY” ARTHUR GRAY of Lethbridge, Alberta, passed away at the Chinook Regional Hospital on August 5, 2015 after a lengthy struggle with cancer and COPD at the age of 78 years.

Larry is survived by his three children Roxanne (Jeff) Janecke of Lethbridge, Lorne (Deb) Gray of Calgary, and Laura (Warren) Pickett of Lethbridge. He also leaves his grandchildren: Lindsey (Robert) Bedford, Stacey and Brittany Janecke, & Eric and Ian Gray & his great grandchildren Graydon and Brynlee Janecke & Charlotte Bedford. Larry is survived by his sister Margaret Archibald, and also by a large extended family on both sides.

He was predeceased by his wife Doreen, granddaughter Sarah as well as seven brothers and four sisters.

Larry was born and raised on a farm in the Granum area, he was the youngest of 13 children. When he was 17 he joined the Navy where he learned his trade as a steam engineer. He married Doreen in 1957 and they lived in Victoria until 1959. They moved back to Lethbridge where he worked for the Lethbridge Correctional Center as a guard, Canbra Foods and The University of Lethbridge as a steam engineer.

Larry and Doreen moved to an acreage by Raymond where he continued to live until last year and then returned to Lethbridge to be closer to his children due to failing health.

Larry loved to hunt, read and load his own ammunition. He and Doreen would drive around the country for hours with their dog Lacey. Larry continued to do this even after Doreen’s passing.

Larry lived and loved life to the fullest and in his earlier days rode bulls and horses in local rodeos along with his son Lorne, parachuted with his daughter Roxanne, and went shooting with Laura.

In lieu of flowers, donations may be made to the St. Augustine’s Renovation Fund, 411 – 11th Street South, Lethbridge, Alberta T1J 2N9.