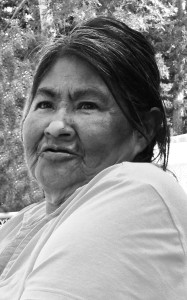 DEBRA SMALL EYES passed away in Coeur d’Alene, Idaho on August 5th, 2015 at the age of 63 years. She was born to Joseph Nanamkin Sr. and Danita McJoe in the state of Washington, USA. Debra is survived by her children Darren (Audrey), Rosie (Ferral), Kenny (Bonita), Sonny, Sherri Small Eyes, Troy (Samantha), Tayshaun, and Debi Jr.; also many loved grandchildren and great grandchildren.

Debra came to live on the Blood Reserve in 1970 with her husband Sam where they raised their children and some grandchildren. Debra loved her family, extended family, friends, and numerous children who were friends of her children. Debra has had success in the professional field but her greatest success was being involved with the many children who came into her life, home, and heart. She loved listening to these children talk about themselves and their families. She seemed to know who needed someone to just listen to them, who needed a shoulder to cry on, who needed a hug and who needed and wanted a laugh.

Debra was employed through the years at the Blood Indian Hospital, Kainai Board of Education, and at the Blood Tribe Department of Health, First Steps for Healthy Babies. She loved her time at First Steps because she worked with families and sincerely hoped that she made a difference in their lives.

Debra was given the Blackfoot name Saatsitapiaakii – Woman from Across The Mountain by John – (Tsaip) Across The Mountain in the early 70’s. Debra again received the same name from Rosie Day Rider and Louise Crop Earred Wolf many years later. Debra respected and loved all the Elders whom she has known and been friends with.

Debra has been blessed with the respect and friendship of so many people who have been in her life. Debra will be laid to rest but she is not gone as she lives on in her children, grandchildren and great grandchildren.

One Condolence for “SMALL EYES Debra”