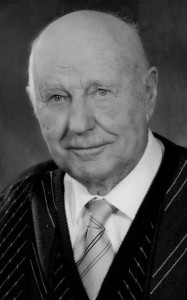 Ernest James “Jim” Wallwork of Bow Island passed away on Thursday, August 6, 2015, at the age of 95 years. He leaves to cherish his memory three children, Dave (Margery) Wallwork of Bow Island, Allen (Arlene) Wallwork of Airdrie and Margaret (Bill) Benson of Edmonton; six grandchildren, Vince (Carla) Wallwork, Ethan Wallwork, Amy Wallwork, Randi Wallwork (Dan Cornish), Tiegan Benson and Thomas Benson; three great grandchildren Aiden and Eric Wallwork and Kane Cornish. He also leaves his summer son Don (Jan) Milne and their children Scott and Ryan to cherish his memory. He was predeceased by his parents, Marian and Walter Wallwork; his wife Doris on January 22, 2005; two sisters Dorothy Weir and Lucille McDonald. Family and friends who wish to pay their respects may do so at the church on Tuesday, from 1:00 – 1:55 p.m. The funeral service will be held in St. Andrew’s United Church (139 2nd Ave West, Bow Island) on Tuesday, August 11, 2015 at 2:00 p.m. with Pastor Sheila McLeod officiating. Interment will follow in the Bow Island Cemetery. As an expression of sympathy donations may be made to the Pleasant View Lodge, Bag 6700 Bow Island, AB T0K 0G0 or to St. Andrew’s Church Memorial Fund, Box 36, Bow Island T0K 0G0. To e-mail an expression of sympathy, please direct it to: pattfh@telusplanet.net subject heading: Jim Wallwork, or you may visit www.pattisonfuneralhome.com and leave a message of condolence. Arrangements are by the PATTISON FUNERAL HOME AND CREMATORIUM 540 South Railway St. SE, Medicine Hat T1A 2V6. Please call 1-866-526-2214 for further information.