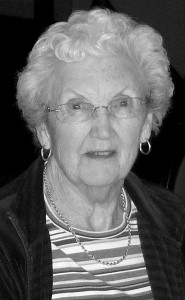 Doreen Spearman was born in Yorkshire, England to Edith Emily Jolley and Sidney James Jarvis. In 1945 she met Alan and they were married on June 21st 1947. Doreen and Alan and their family moved to Canada in 1957, leaving their families behind in order to provide greater opportunities for their own young family. Mum and Dad enjoyed a wonderful 70 year relationship which included living in Quebec, Newfoundland, Prince Edward Island, Nova Scotia, Ontario, and Australia before settling in B.C. for their retirement. Doreen used her creativity, ingenuity and talent to make things herself, rather than buy them. Her sewing machine was never far away and she sewed clothes and even one granddaughter’s grad dress. Mum was an amazing cook, effortlessly hosting large family meals, making homemade pies in batches and always having the cookie tins full. Her oatmeal crunchies and lemon squares were legendary in our family. She was an artist and the family home is filled with her paintings. She used all kinds of techniques, brush and pallette knife and oil and water based paints. She frequently went to workshops to improve her technique. She supported the arts and volunteered at Rodman Hall in St Catharine’s. Doreen had a generous spirit and a sharp mind and always looked for new interests. She took an investment course and proved to be a canny investor. A lifelong learner, Mum took learned to use computers later in life. She found practical ways to efficiently use her new skills, using e-mail and facebook accounts to maintain daily communication with her family and friends in remote locations.

Mum lived her life based on personal philosophy of “family first”. Doreen was blessed with three children, six grandchildren and six great- grandchildren. She faithfully attended every significant event in our family, regardless of the distance to get there or her personal state of health. She delighted in attending family weddings, baptisms and graduations. When we needed it, Mum was always an unfailing source of support. She loved family gatherings and celebrated our accomplishments. In retirement, Doreen and Alan lived in Saanich B.C., They joined the Saanich newcomers and participated in many of their activities. They met many new people and welcomed them to the Victoria area. They frequently went on trips abroad or regularly visited children, grandchildren and great-grandchildren.

Doreen is survived by sons Peter and Chris, and grandchildren Jennifer (Gavin), Erika (Darcy), Matthew (Zoe), Heather (Jeremy), Kristen (Rod) and Andrew as well as 6 great-grandchildren. Doreen was pre-deceased by husband Alan ( June 2015) and son Tim (August 2009). Doreen loved Alan all her married life and received his love in return. A celebration of Doreen’s life will take place at St. David-By-the-Sea Anglican church in Saanich,BC