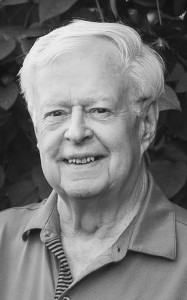 Charles James of Lethbridge, beloved husband to Patricia James, passed away suddenly in High River on Tuesday, August 18, 2015 at the age of 84 years.

Born on February 13, 1931 in Lethbridge, Alberta, to Avener and Reta James, Chuck was raised and educated in Lethbridge. After attending Lethbridge Collegiate Institute, he enrolled at the University of Saskatchewan, graduating in 1952 with a Bachelor of Science degree in Agriculture.

Following in his father’s footsteps, Chuck joined Deere and Company starting as a summer student and eventually building a successful management career. While working in Peace River country, Chuck met and married his beautiful Patsy Boyd in 1954. Together they lived in various communities in western Canada, including Vernon, Prince George, Calgary, Camrose, Vermilion, Winnipeg, and finally returning to Lethbridge in the summer of 1973. Chuck went into business with Murray McKay at McKay Brothers Farm Implements until his retirement in 1992. Since then, Pat and Chuck have enjoyed a wonderful retirement golfing and travelling together.

Chuck James valued community service and found time to volunteer for various organizations including: Kinsmen, Boy Scouts of Canada, Probus (one of the founding members), the Alberta/BC Farm Implement Dealers Association, Lethbridge Air Show, Lethbridge College Foundation and Salvation Army Advisory Board. Chuck was a dedicated member of Rotary for over 40 years and a Past President of the Lethbridge Rotary East Club. Chuck was also an active, life time member of First Baptist Church. Most importantly, Chuck enjoyed spending time with his family, especially the grandchildren, both in Lethbridge and Whitefish. G’pa will be greatly missed!

A Memorial Service will be held at 2:00pm on Saturday, August 22. 2015 at FIRST BAPTIST CHURCH, 1614 – 5 Avenue South, Lethbridge, Alberta. Cremation. An inurnment will take place in Mountain View Cemetery.