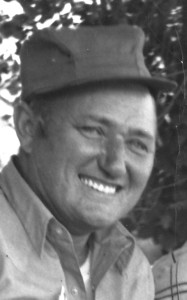 FLOYD L BENNETT, beloved husband of Dorothy passed away at the Raymond Health Centre on Monday, August 24, 2015 at the age of 84 years.

Floyd is predeceased by sons Craig, and Brian; parents Leland and Dorothy, and step-father Dave Carpenter.

Floyd spent his entire life in the Magrath area where he farmed until he retired in 1992.