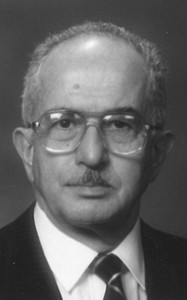 Michel Mikhail, beloved husband and father, passed away peacefully on August 25, 2015 at the age of 90 years.

Born on October 13, 1924 in Cairo, Egypt. He attained his B.Sc. and B.Ed. at Cairo University. He married Sophia in 1958 and lived in Port Said, where both of their sons were born. He taught science, was a high school Principal and trained in watch repair. Michel, Sophia, and their sons immigrated to Canada in 1968. Michel was employed at General Coach for 5 years, he then opened Lethbridge Watch and Repair in 1972, retiring in 1988. He enjoyed hunting, fishing, woodwork, league bowling, and was a gifted painter.

In Lieu of flowers, a donation may be made to the Good Samaritans Society Park Meadows Village for their loving care of Sophia, 1511 – 15 Ave N, Lethbridge, AB T1H 1W2