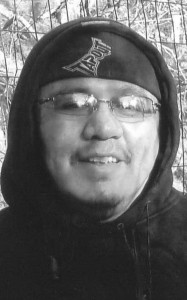 MERVIN TRAVIS “Pumpkin” VIELLE passed away suddenly in Lethbridge on August 19th, 2015 at the age of 42 years.

Mervin’s education started with head start in Port Angeles, WA 1976 – 1977; grade one in Fall City, WA 1977 – 1978; Stand Off Day School 1979 – 1988; Fort Macleod G. R. Davis & F.P. Walsh; YMCA 1993; training LCC. He worked with his brothers in Medicine Hat but due to injuries on the work site, he couldn’t work anymore. Mervin was a shy, quiet, kind hearted guy. He like playing all kinds of sports with his brothers, cousins and friends. He enjoyed playing with grandkids, had a sense of humor, always joking around with Mom and others, loved playing his games and listening to music. The family will miss Mervin as he goes on his journey to the Spirit World.