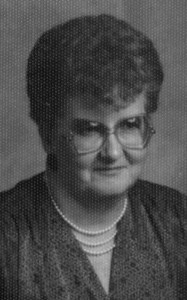 With great sadness, the family of VIVIAN CAROL SMITH announce her passing on Sunday, August 23rd, 2015 at the age of 75 years.

Vivian was born in Foremost on September 22, 1939 to Viola and Claude Baker. She joined the R.C.A.F. where she met Merle Smith Sr., started a family and settled in Lethbridge. Vivian was an active member of the Legion and for 39 years, was a member of the Ladies Auxiliary. She enjoyed curling, golf and travelling with Dennis.

Vivian will be laid to rest with her parents in the Foremost Cemetery at a later date.

Flowers are gratefully declined. In memory of Vivian contributions may be made to the Ladies Auxiliary of the Royal Canadian Legion, General Stewart Branch #4, 324 Mayor Magrath Drive South, Lethbridge, AB., T1J 3L7.