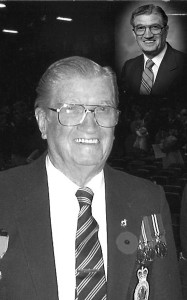 Mr. Henry Alexander Rennie, beloved husband of the late Mrs. Gertrude Rennie, passed away on Thursday, August 27, 2015 at the age of 94 at the St. Therese Villa in Lethbridge, Alberta.

Henry was born on Monday, January 03, 1921 in Aberdeen, Scotland where he was raised and educated. Henry served in the Royal Air Force from 1939 to 1946 and married the love of his life, Gertrude in Medicine Hat in 1942. In 1944 they moved back to Aberdeen, Scotland where they lived until 1948, at which time they moved to Lethbridge. He was employed as a department manager for Eaton’s Company and retired in 1982. During his life in Lethbridge, Henry was a lifetime member of the Royal Canadian Legion, an avid curler, as well as a long standing member of the Henderson Lake Golf Club.

Besides his loving wife Gertrude, Henry was predeceased by his parents William and Christina Rennie; brother Dick Rennie; sisters Doris Frost and Kirsten Morrice; as well as a grandson Brad Overn.

Interment will take place at a later date in the Mountain View Cemetery.