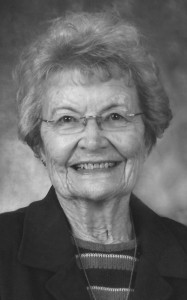 Mrs. Ethel Irene Herbst of Lethbridge, Alberta, passed away at the Legacy Lodge on Monday, August 31, 2015 at the age of 91 years.

Ethel was born in Foremost, Alberta on September 10, 1923 to William and Martha Ovans. She was raised in the Warner area and attended Normal School in Calgary. Her teaching career took her to Larkspur, Legend, Etzikom, Nobleford, Cranford and Barnwell.

Ethel married Mathias “Matt” Herbst on July 3, 1947. They farmed together in Warner where they raised their four children. Ethel and Matt retired to Lethbridge in 1983. Ethel loved her family and friends and enjoyed sewing, handwork, and china painting. She never stopped creating.

A Funeral Mass will be celebrated at 11:00AM, on Saturday, September 5, 2015, at OUR LADY OF THE ASSUMPTION CHURCH, 2405 – 12th Avenue South, Lethbridge, with Father Lukas Drapal celebrant. A private family Inurnment was held at Warner Cemetery.

In lieu of flowers, memorial donations may be made to the Heart and Stroke Foundation, Box 2211 Lethbridge, Alberta T1J 4K7.