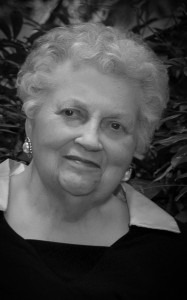 “You kids stay home and get the work done. I’m going off with Daddy-O.”

Beth was always entertaining (dinner for 30 in 30 minutes), or ready to head off on a trip with Bob. She has now joined him for the last leg of their journey – a well-deserved rest. Mom and Dad didn’t miss a birthday or an anniversary together, having celebrated their 94th birthdays and their 74th anniversary last fall.

Beth is survived by her brother, Paul Madge, her sister-in-law, Mabelle Fleming and numerous nieces and nephews.

Beth was always ready and willing to share with others – a smile, a song, a poem, a story, a meal, a bed and a listening ear. She was happiest when surrounded by family, friends and strangers who soon became friends. There was always room for one more…. and we have been blessed and privileged to have been amongst the vast number of people whose lives she touched.

The family is so grateful for the personal, loving care received from the doctors, nurses and staff in Milk River.

A family Graveside Service will be held at 11:00 am on Saturday, September 12, 2015 at Milk River Cemetery.