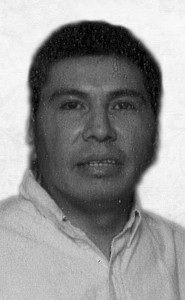 Tommy was born on the Blood reserve on June 22, 1965 to the late Louis Many Shots and Rita (Wolf Child) Many Shots. He was raised on the Blood Reserve by his late grandparents, Albert and Cecile Wolf Child.

A Family Service will be held at CORNERSTONE FUNERAL HOME, 2800 Mayor Magrath Drive South, Lethbridge, Alberta, on Friday, September 11, 2015 at 4:00 P.M. followed by a Wake Service at SENATOR GLADSTONE HALL, Blood Reserve, Alberta, beginning at 5:00 P.M. and continuing all night.

A Funeral Mass will be Celebrated at ST. MARY’S IMMACULATE CONCEPTION PARISH, Blood Reserve, Alberta on Saturday, September 12, 2015 AT 11:00 A.M.