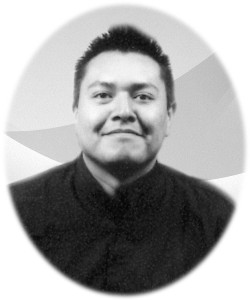 It is with heavy hearts we announce the sudden passing of our beloved son, dad, grandson, brother, nephew, cousin and friend, JASON TYLER RED CROW, in the early morning of Monday, September 9, 2015 at the age of 33 years.

Jason left us with a legacy of memories that we shall cherish forever, his big smile, laughter, humbleness, kindness, respect but most of all his love for his family. Jason grew up with his cousins that he took as his siblings, Kendall (Tanis), Bradford (Sandy), Felishia Red Crow, Lisa (J.B.) Iron Shirt C.J. Wright, Sasha (Jon) Wells, Cori, Rori, and Hailee White Quills, Jeremiah Davis, Hawk Williams, Ky Many Fingers, Paul Jr. (Jasmine) Low Horn.

Jason`s early education began at Levern Elementary School and Tatsikisaap`op Middle School. He continued with his education, both Jr. and Sr. High School at St. Mary’s. He then furthered his education in 2007 at Lethbridge Community College, enrolled in the Criminal Justice Program, graduating with honours. In 2013-2014, Jason gained employment with BTEST. In doing so, he received 20 job related tickets and accomplished a great work ethic, obtained valuable knowledge and skills, allowing him to work in Fort Mc Murray on the Fort McKay Project.

Special Thank You to Blood Tribe Fire fighters, Ambulance, Police, Basil Devine and Clay Plume. A heartfelt Thank You to Cornerstone Funeral Home for their Compassion, during this difficult time.

A Family Service will be held at CORNERSTONE FUNERAL HOME, 2800 Mayor Magrath Drive South, Lethbridge on Sunday, September 13, 2015 at 3:00 P.M.