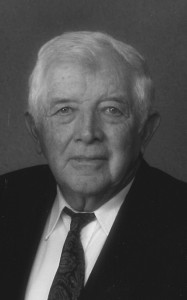 George Cornelius Wall of Lethbridge, Alberta, beloved husband of Mary Wall (Penner), passed away peacefully at the Chinook Regional Hospital on September 9, at the age of ninety-one years.

George was born in Karassan in the Crimea. His family immigrated to Canada when he was six years old, the youngest of five children. The Wall family made their way across Canada by train and settled in Coaldale where they began to farm. George had a passion for farming and from those beginnings he established a successful farming and livestock business with his family.

George had a strong commitment to his community. He was a long time member of the Coaldale Mennonite Church. George also served on many boards such as the Irrigation Council of Alberta and for thirty years as a member of the Coaldale Hospital Board. George had a deep interest in geography and he and Mary travelled extensively throughout the world.

George was predeceased by his son Bob Wall and son-in-law Jake Willms.

George treasured his family and truly enjoyed the times spent together celebrating. He will be forever missed.

The Funeral Service will be held at 2:00 pm on Monday, September 14 at the COALDALE MENNONITE CHURCH, 2315 – 17 Street, Coaldale, AB with Pastor Lillian Thompson and Gerald Klassen officiating.

In lieu of flowers, memorial donations may be made in George’s name to the Canadian Food Grains Bank. Cheques may be mailed to Box 1028, Coaldale, AB T1M 1M8.

One Condolence for “WALL George”

Leave a Condolence for Calvin & Cindy Miller and family