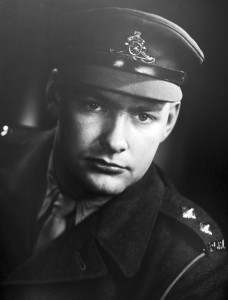 CAPTAIN DON DALKE C.D., of Lethbridge, beloved husband of Marjorie Dalke, passed away at the Chinook Regional Hospital, on Saturday, September 12, 2015 at the age of 84 years.

He proudly served over 16 years of military service. His career started at age 14 in the local Army cadets, then joining the local Militia at age 16 with the 20th Independent Field Battery, Royal Canadian Artillery. While as a Sergeant during a Command Contingent Course in Camp Shilo, Manitoba, Don took his commission during summer training 1949 as a Survey Officer with 2nd Regiment Royal Canadian Horse Artillery.

When the Korea War broke out in 1950 he volunteered for the Special Force serving in Korea. He remained in the service for 12 years for a total of 16 years taking him to serve in many countries.

Don was involved in many areas of the community and organizations. With his strong entrepreneurial spirit and work ethic he established Southland Ford Equipment Sales Ltd in 1970. With his overall experiences, he was a driving force as the General Manager for the Lethbridge Centennial Society. He was instrumental in helping to start many new businesses while being the first Executive Director of the Lethbridge and District Business Development Centre Association. In his later years he was in demand as a speaker as a Business Management and Training consultant.

His passion laid with the various military groups in town. He was primarily responsible in getting the members of the Korea Veterans Association branch #53 their medal and was proud to recently coordinate the 60th anniversary celebrations in Lethbridge.

He was instrumental in raising funds for the Korea War Veterans National war monument in both Ottawa and Korea. He also published a book detailing his experiences entitled The Korea War.

He was the only Korea War Veteran who provided evidence 11 February 2013 to the Senate Committee on National Defence and Security in support in creating Bill S-213: An Act Respecting a National Day of Remembrance in Honour of Veterans of the Korean War. The Act creates Korean War Veterans Day to be held each year on July 27.

Most recently he was heavily involved as a director with the Lethbridge Military Museum responsible for the setup of the Korea War display.

Don is survived by his beloved wife Marjorie and his daughter Suzen Dalke (Greg) and a grandson Ron Crowe.

A Memorial service will take place at the ROYAL CANADIAN LEGION GENERAL STEWART BRANCH NO. 4, 324 Mayor Magrath Drive South, Lethbridge on Friday, October 16, 2015 at 1:30 P.M.. Don will be interred at the family plot Union Cemetery, Calgary at a private ceremony.

In lieu of flowers, donations can be made to the Ladies Auxiliary of the General Stewart Branch No. 4 Royal Canadian Legion, 324 Mayor Magrath Drive South, Lethbridge, AB, T1J 3L7