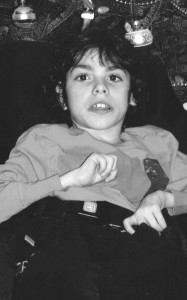 A tiny hand reached down and a soft voice whispered…“Come – it’s time. I have such wonders to show you”. And so, on September 15, 2015, at the age of 23, Ryley James Marino took the hand of his sister and slipped from our world into heaven.

Ryley was born August 6, 1992 to James and Barbara Marino, the third of four children. He is survived by his parents, older sister Raina (Ryan) and their son Ryder; younger sister Myriah; and his grandmother Shirley Turner; along with a huge extended family. Ryley was predeceased by his sister Leisha, his grandfather Richard Turner; and grandparents Carlos and Dena Marino.

Born with a rare metabolic disorder, Ryley’s path in life would venture into the unknown; a path that would constantly pit his mind and spirit against his body. That being said, life is meant to be lived and he did it in spades.

Ryley was raised on a farm on the jail road and attended Sunnyside School and eventually R.I. Baker School in Coaldale. Ryley loved school. He loved the noise and chaos; but mostly it was the children who went out of their way to include him in everything. And he was so lucky to have his aide Paulla Deren-Reck with him for so much of it.

While Ryley was physically limited, he was still quite busy. For a while he could crawl and was always disappearing under a table or into a cupboard. He loved crocheted blankets and was forever tangled up in them. He liked to sit beside his sister “helping” her do homework, either grabbing her pen or pulling on her hair. If he thought for a moment that he wasn’t getting enough attention he would let out a screech that could shatter glass. He loved weird and loud noises – the beeps from his medical equipment, chainsaws, weedwackers, lawn mowers, motorcycles, and watching ceiling fans spin. He loved being outside and “hiked” the coulees with his host family every other weekend. And music – Ryley loved loud, booming music – his favorite being Katy Perry; the booming base and loud drums. It would make him laugh. Ryley had the best laugh.

He loved to travel. And he did. As far west as Vancouver (didn’t like the ocean – too cold), east to Quebec City (loved the cobblestone streets in his wheelchair), north to Silver Valley and south to Denver. Even to Hawaii where he loved the hot sand (ocean was still too cold). It wasn’t simple to travel with him but we did it anyways.

More than anything else Ryley loved people and there were so many that enriched his life along the way. How do you say thank you to those who added so much to his life – his host family, Dorothy and Michael Tipper who walked miles with him just to be outside; or all of the caregivers from SACLA who made it possible for us to keep him at home. Especially Kori – don’t think he is done messing with you yet Kori! And to Linda who spent hours reading to him. He loved listening to you and he missed you when you had to leave. To all of the people over the years, thank you. You know who you are and we are eternally grateful.

A final thank you has to be said – to the paramedics Dan and Carl, the Chinook Regional Hospital ER staff, to Dr. Oviatt and Dr. Bruwer for their expertise and guidance, to the respiratory staff for their skill and support and to the entire staff of 5C – Pediatrics that took such exceptional care of Ryley. In particular – Leona – I’m not sure you are aware, but Ryley chose you for this final stage. Not just because of your absolutely outstanding skills as a nurse, but also because of your innate kindness and compassion. With your unwavering support, as a family, we were able to take this final step together and be at peace with it. It means everything to us.

And to Ryley – we want to thank you for choosing us as your family for the time that you had. It is absolutely impossible to put into words all that you were – with your beautiful thick brown curls, ridiculously long eyelashes and spectacular smile – you are a reminder everyday of what is important. You were so loved and will be so missed.

One Condolence for “MARINO Ryley”