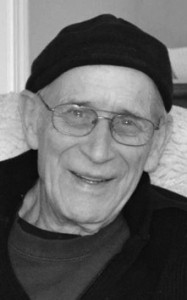 John Leach McCauley died peacefully in the Red Deer Regional Hospital on Thursday, September 17, 2015 at the age of 76 years, and is now in the arms of his Lord and Savior, Jesus Christ.

John is survived by his wife Edna, to whom he was married for 55 fun-filled years. John is also survived by their four children: Tim (Judy), Terry (Catherine), Maureen (Jesse) and Janet, his grandchildren: Tyler (Kristen) and their two sons Jayce and Garen; Matthew (Mily) and their son Isaac; Justin, JJ (Shanna) and his three children Ayla, Paisley and Joey; Paul (Anna); Afton (Dan) and Dan’s children Dylan and Brooke; and Michael. John additionally is survived by his sister Sharon (Dave) Bourassa and her children Christopher, Suzanne, Jo-Anne (Wade) and their daughter Elliot; and John’s brother Bill’s wife Aldia and their children Shaunna (Trevor) and her daughter Collette; Lance (Kathie) and his children Brent, Tyson and Sidney; Scott (Pat) and his children Chase, Quinton and Cooper; and Jason (Karen) and their children Riley and Reed. He also considered Jamie (Turnbull) Kuryvial his granddaughter – if not in blood, in love, and by numerous nieces, nephews and cousins.

John is predeceased by his parents Jim and Freda (Britcher) McCauley and his brother William (Bill).

John was born on August 25, 1939 in Port Arthur, Ontario. After high school, he pursued his love of cars by attending NAIT and becoming a licensed auto mechanic, mostly with GM dealerships in BC and Alberta.

John met his sweetheart, Edna Gascon in a blind date set up by his cousin Faye (McCauley) Smith, who, at the time, was Edna’s roommate. John and Edna were married in Barrhead, Alberta on May 27th, 1960. He was a proud father to all four of his children and loved to roughhouse and play games with them.

John loved his children very much and his grandchildren had a very special place in his heart. He was Grandpa and Papa to them, and if mischief was being carried out, we always knew to look for him to blame first. No occasion was too solemn for a good laugh!

Music was an important part of John’s life, and he bought his first guitar – a Gibson J45 – in his early 20s, and his favourite artist was Johnny Cash. He loved to play his guitar, and though he greatly slowed down in his later years, he played right up to a few months before he passed away. When the kids were younger, the family was very active square dancers and enjoyed going every weekend to Demmit, Alberta to square dance with the Ray Lake Dancers.

John and Edna were active in the Fort St. John and Taber Evangelical Free Churches over the years and loved being involved in musical groups, ministries, and playing country gospel along with the Sonshine Gospel Singers. They also were active members of Taber Citizens on Patrol while they lived there. They also attended the Lethbridge Evangelical Free Church during the eight years they lived in Lethbridge. During that time, they lived at the Sierras Condo and greatly enjoyed their time with friends and residents there.

His laughter and good humour will be sorely missed by all who came in contact with him over the years. He often spoke fondly of how blessed he was to have such a wonderful family, and many friends.

The family would like to thank Dr. Lee, Dr. Jim and the caring nurses at the Red Deer Regional Hospital, Unit #31, as well as the staff at the dialysis unit where dad spent twelve hours a week of his life. Dad loved to joke with all of them, and they loved to help him in return.