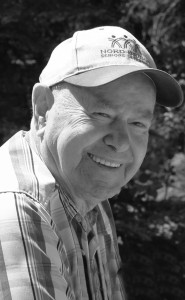 Al was a kind, gentle soul whose life brought smiles to all those who had the privilege of knowing him. He will be greatly missed by all including his 10 great grandchildren.

Al was born the second youngest of 19 children in the farming community of Holdfast, Saskatchewan. His early years were spent farming, fishing & schooling, this is where he met his wife to be, Emelia.

Al & Emelia moved to Regina, Sask. where they raised their three children, Darrell, Doug and Greg. Al was employed as a crane operator till the recession of the early 70’s when he relocated the family to Lethbridge. Dad stayed the course working in the steel industry and mom at Sears till they both retired. They spent many happy years camping with friends, having family gatherings (such as reunions and Frohlick sausage making) and travelling. Mom left dads side in her passing in 2007. Dads final years were spent travelling with family and friends as well being an active member of the Norbridge Senior Centre. He was able to remain in his own home almost to the end.

Leave a Condolence for Anita Rieger