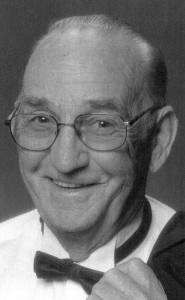 May 15, 1931 – September 23, 2015, passed away in his sleep at the Edith Cavell Care Center having lived an extraordinary, experiential life. Andrew was born on the family farm east of Granum Alberta, the youngest of 5 children to Granum Pioneers Ranze and Tjitske Weerstra. He was predeceased by his wife Norma, his daughter Barbara Clay and Brothers Joe and Roy Weerstra. He leaves to mourn and celebrate his life, his children Wendy Weerstra (Cochrane) and Donna Weerstra (Oryst Kowal) of Calgary and his son John Weerstra (Sylvia) of Bragg Creek, two sisters Jenny deClearq (Calgary) and Johanna Mackintosh (Claresholm), the mother of his children Isobel Gossel (Calgary) his step children, Allan, Mike, Terry Mayderof Calgary and Wendy Huppe of Bragg Creek. He has 11 grandchildren and 10 great-grandchildren. He is also survived by numerous nieces and nephews all of whom enjoyed spending time with Uncle Andrew.

Andrew established early in life his passion to explore, dream and conceptualize adventures, business proposals as well as multiple social, political and community enhancing initiatives. He achieved many goals; boxing when he attended SAIT as a young man, playing ball, stock car racing, curling and earning his wings to fly private aircraft. He taught his young family to boat, water ski and fish. He loved camping and spent splendid years with Norma “at the lake”. Ever a jokester, he teased, laughed and enjoyed many a good joke. Using his humour, wisdom and passion for municipal affairs he was elected Mayor of Granum, where he worked with his many friends in his beloved home town. Andrew made long standing friendships, always willing to assist others. He was also a friend of Bill W. with whom he shared his most spiritual moments.

Failing health and vision necessitated a move to Lethbridge where he received care, and lived closer to his grandchildren and great- grandchildren. The last few years were likely his most challenging as he bravely contested his declining abilities. He did, however, maintain his interest in politics, current world news and shenanigans of his great grandchildren. He enjoyed having historical, scientific books and articles being read to him. The world has lost a great man.

A Service of Remembrance will be held at CORNERSTONE FUNERAL HOME, 2800 – Mayor Magrath Drive South, Lethbridge, on Saturday, October 3rd, 2015 at 11 A.M., with Reverend Glenda Wert officiating. A private interment will be held at a later date.

Flowers are gratefully declined. In memory of Andrew, contributions may be made to STREETS ALIVE, 323 – 4 Street South, Lethbridge, AB. T1J 1Z9.