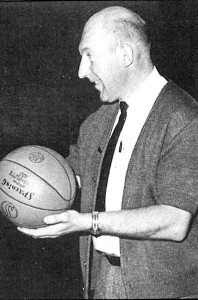 PIUS ALOIS LABOLEVECH passed away peacefully on September 25, 2015 at the St.Michael’s Health Centre, Palliative Care Unit at the age of 80 years.

He is survived by one sister, Marge Geffre; nine nephews and four nieces; and by a long time friend and companion Frances Beresnak. He was predeceased by two sisters, Lillian Reiner and Barbara Feist.

Pius was born (son of Stephen and Veronica (Jahner) Labolevech) and raised in North Dakota, where he taught and coached basketball for 9 years in various schools. In 1968, Pius relocated to Coaldale to teach and coach boys’ basketball at Kate Andrews (KA) High School.

During his 17-year coaching career at KA, Pius was regarded as a basketball visionary who believed that the profile of high school basketball could be elevated to greater heights and was considered to be a man of great influence who displayed a strong passion and heart for seeing young people succeed. His tireless efforts contributed greatly to the quality of Southern Alberta high school basketball tournaments.

Between 1972 and 1976, Pius led the KA boys’ basketball team to 5 consecutive 3A zone championships, including a capstone provincial championship in 1973. Pius was also instrumental in the creation of the Southwest Conference (an amalgamation of 2A and 3A schools) and successfully pushed to move zone playoffs from school gymnasiums into larger venues including the Lethbridge Civic Centre, University of Lethbridge and the Lethbridge Sportsplex.

On May 2, 2015, just a few months prior to his passing, Pius was inducted into the Lethbridge Sports Hall of Fame where his family and friends were able to formally recognize and celebrate his accomplishments. The day was an immeasurably proud and happy one for Pius.

To Pius’ family and friends, he was known for being a man of his word, integrity, kindness, generosity, sacrifice and un-waivered commitment. Pius was very social and enjoyed engaging others with humorous and intellectual conversations that were a mixture of laughter and the making of memories. His unique ability to remember important dates, people’s names and their individual stories made those who knew him feel appreciated, valued and loved.

Son, brother, long-time companion and ‘Uncle’ to his Lethbridge family who loved him dearly, friend and forever coach… Pius will be deeply missed by all who have survived him; and those whose lives he influenced and touched will be forever changed.

Our family would like to extend a heartfelt thank you to the St.Michael’s Heath Centre Palliative Care Team for the exceptionally kind and compassionate care they provided to Uncle Pius during his brief stay there with them.

A Service of Remembrance will be held at CORNERSTONE FUNERAL HOME, 2800 Mayor Magrath Drive South, Lethbridge on Friday, October 2nd, 2015 at 1:00 P.M., with Deacon Frank Peta and Mr. Alanzo Paul officiating. Pius was a very colorful person! So, in his honour and memory, please wear a piece of color on the day of Pius’ celebration of life.

In lieu of flowers, our family respectfully asks that you instead donate to a new memorial scholarship that is being set up for students in Pius’ name at Kate Andrews High School, 2112 – 21st Street, Coaldale, Alberta, T1M 1L9.