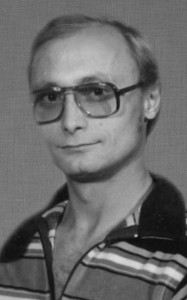 LONNY D. PRINCE passed away suddenly on Friday, September 25th, 2015 at his home in Shaughnessy. Lonny was born January 8th, 1954 in Cardston, Alberta to Marion and Arla (Peterson) Prince. He is survived by two sons, Kyle and Devon, two sisters, Treva Hall and Cavell (Craig); nine sisters-in-law: Peggy Prince, Valerie Prince, Rhonda, Deana, Dawn, Peggy & Helen Wright; many nieces, nephews, cousins and extended family. Lonny got his education in Calgary as a draftsman and a machinist, then moved to Kelowna, B.C., when he also got started creating fancy stripping for vehicles and enjoyed playing racquetball. He then moved back to Calgary and then to Shaughnessy. He was predeceased by his wife Elizabeth “Betty”, mother and father-in-law Ronald and June Wright, brothers Wayne, Gordon and Rickey Lynn, brother-in-law Roy Hall and nephew Marion “Lucky” Starzyk.

A Graveside Service will be held at the BEAZER CEMETERY, Beazer, Alberta on Thursday, October 1st, 2015 at 1:00 P.M.

One Condolence for “PRINCE Lonny”